Top Things to do in Trebinje, Bosnia and Herzegovina

Trebinje is a town relatively unknown to the rest of the world, meaning it's the perfect place to enjoy a slower pace of life. 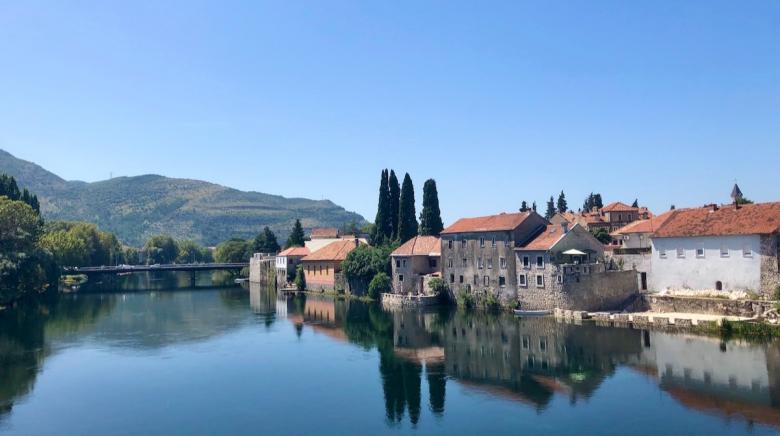 Located on the southernmost tip of Bosnia and Herzegovina, Trebinje is mainly known for being a stopping point between more popular cities like Dubrovnik, Herceg Novi, Mostar, and Sarajevo.

Like many Balkan cities, Trebinje's land has been claimed in the name of countless rulers, countries, and dynasties. In the Middle Ages it belonged to the Serbians, then Bosnia claimed it for a short time until the Ottoman Turks took over.

The Ottomans saw Trebinje as a perfect stronghold in their war with the Venetians for land along the coast. As such, they built much of the city we know today - the walls, the Old Town, and even the famous Arslanagic bridge.

Eventually the Ottomans were driven out after continued uprisings and their desire to place most of their forces in Montenegro. Afterwards, the land passed through the hands of the Austro-Hungarians, onto Yugoslavia, and then the Serbians during the Bosnian War.

Today it is under the control of Bosnia and Herzegovina but remains strongly Serbian influenced, with more than half of the population claiming Serbian heritage rather than Bosnian. Those who visit are either Balkan natives who know the secret beauty of Trebinje, wine-lovers who have heard rave reviews about the vineyards, or people like me who stumble upon it in a happy accident.

Top Things to do in Trebinje

Trebinje is in the midst of wine country and has become a major hub for Balkan connoisseurs. They come for the centuries-old vineyards, some family owned and some found in monasteries.

Tip! - If you want to sample wine, try the Tvrdos Monastery. There's something oddly satisfying knowing monks prepared your wine (no religious guilt for getting drunk).

Although the region is mainly known for white wines - crisp, acidic, and/or fruity, there are red wines to taste as well (albeit a bit sweet for me). But either way, drinking wine is a great pastime. As Tyrion Lannister says, "Everything's better with some wine in the belly," and who are we to argue with the Hand of the King?

The Hercegovacka Gracanica is a Serbian orthodox monestary on Crkvina Hill modeled after the Gracanica monastery in Kosovo (a UNESCO World Heritage Site). It was built at the request of the Serbian poet Jovan Ducic, who wanted to be buried in a monestary similar to the Gracanica monastery upon his death. Unfortunately he died far before the completion of the project, but his remains were eventually moved and laid to rest in the complex in 2000 when it was finished.

The walk to the top can be grueling, especially with hot weather, but the view makes each step even more worth it. While the monastery is smaller than you'd expect, the inside is incredibly intricate and ornate, with mosaics and paintings adorning the floors and walls .

Also on the Crkvina Hill is a restaurant with an unbeatable view of the city of Trebinje, as well as an amphitheater where concerts and festivals are held during the year.

Go to the River Beach

Yeah, it's hot. Blistering hot. But, everyone knows the best way to combat heat during the summer is with swimming!

The River Beach is also known as the Swimming Pool Bregovi. It was made by diverting part of the Trebisnjica River into a man-made swimming hole, with the rest of the river curving around the backside of a grassy rise.

A Note - River water = ice cold. The Bosnians don't seem to feel it either. You've been warned.

The River Beach is in the heart of the city and offers more than just swimming - with tennis and basketball courts, drink and food options, and workout "equipment." That, plus an abundance of green grass to lay on under the blissful shade of nearby trees.

Trebinje is surrounded by seven hills, each with its own small treasures to see.

The view, of course, is the biggest draw. Seven hills to climb promise dramatic scenery. These dramatics are enhanced by old Austro-Hungarian ruins, caves, and monasteries that dot the hills. Just watch where you step and stick to the trails! It's said that old land mines can still be found out there - but the marked trails are well-traveled and safe.

Tip - If you're hiking during the summer, start your hike at the crack of dawn BEFORE the sun fully rises. Summer heat is intense and your hike will be much more comfortable if you get an early start.

Of all the "Old Towns" in Europe I've seen (and that's quite a few), Trebinje's is by far the least crowded and most peaceful.

The Old Town (also known as Kastel) was built in the 18th century by the Ottoman Turks, who were a hugely influential conquering force in the Balkans at the time. This small part of the town is primarily built with ancient stones and rests on the bank of the river. It is still inhabited, and seems to be used more by locals going to their favorite restaurants and bars, rather than by tourists sightseeing.

But then again, Trebinje has very few tourists to speak of anyways. Therefore, it can reflect Bosnian authenticity in a way you won't get in Mostar or Sarajevo.

Buy goods from the Market Square

The local market in Trebinje is where you'll see the most locals together at once, picking out grapes, sampling cheeses, and bantering with the vendors.

The market runs from around 8 in the morning to after lunch, around 2-3. If you're unsure of what to buy, vendors are usually more than happy to let you sample their products, provided you're respectful and actually interested in what they're selling.

Walk or bike along the Trebisnjica River

One of the most peaceful rivers you'll find in Europe, the Trebisnjica River lazily stretches through the middle of Trebinje and passes right alongside the Old Town.

There are wide lanes for pedestrians and bikes that allow you to leisurely meander alongside the river without the worry of needing to watch for cars. You won't be alone either, as you'll see that many locals will be on the path too - couples holding hands, kids running by, people out walking their dogs or simply taking a stroll. And yet, the people don't take away from the river's peaceful nature, instead adding to its charm.

Tip! - Take your camera! The water is very clear and you'll see the buildings reflected back in a way that simply begs for a photo.

Looking for a leisurely stroll around a secret gem in the Balkans, complete with wine (of course)? Trebinje might just be your favorite town yet!

Take your time and enjoy everything this sleepy little town has to offer - be it cheese, sightseeing, views, hiking, or wine.